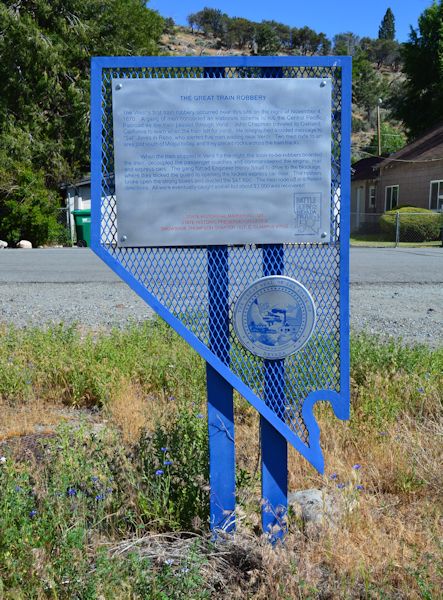 The West’s first train robbery occurred near this site on the night of November 4, 1870.  A gang of men concocted an elaborate scheme to rob the Central Pacific Railroad as the train passed through Verdi.  John Chapman traveled to Oakland, California to learn when the train left for Verdi.  He telegraphed a coded message to “Sal” Jones in Reno, who alerted five men waiting near Verdi.  Two men rode to an area just south of Mogul today, and they placed rocks across the train tracks.

When the train stopped in Verdi for the night, the soon-to-be-robbers boarded the train, decoupled the passenger coaches and commandeered the engine, mail and express cars.  The gang forced Engineer Henry Small to drive to the blockage, there they tricked the guard to opening the locked express car door.  The robbers broke open the strong boxes and divided the $41,600.  The men rode off in different directions.  All were eventually caught and all but about $3,000 was recovered.