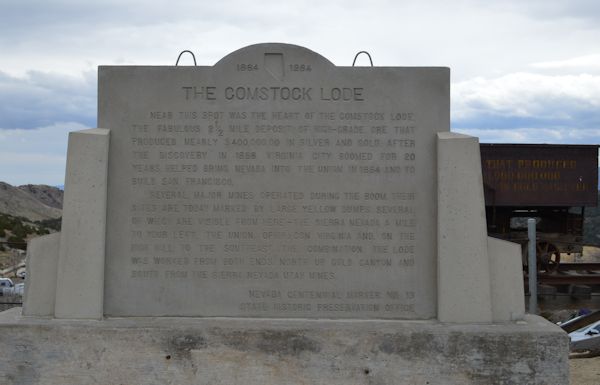 Near this spot was the heart of the Comstock Lode, the fabulous 2 ½ mile deposit of high-grade ore that produced nearly $400,000.00 in silver and gold.  After the discovery in 1859, Virginia City boomed for 20 years, helped bring Nevada into the union in 1864 and to build San Francisco.

Several major mines operated during the boom.  Their sites are today marked by large yellow dumps, several of which are visible from here – the Sierra Nevada a mile to your left, the Union, Ophir, Con Virginia and, on the high hill to the southeast, the combination.  The Lode was worked from both ends, north up Gold Canyon and south from the Sierra Nevada Utah mines.