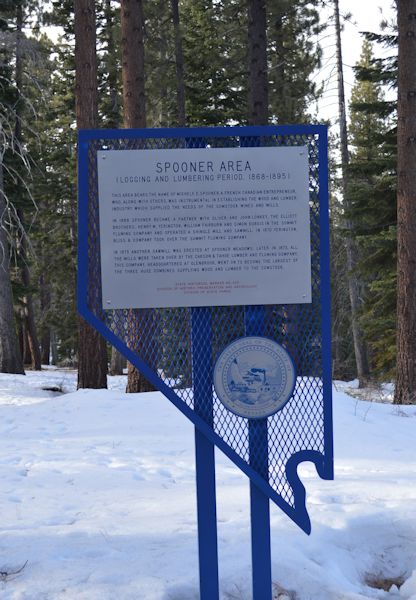 This area bears the name of Michele E. Spooner, a French Canadian entrepreneur, who, along with others, was instrumental in establishing the wood and lumber industry which supplied the needs of the Comstock mines and mills.

In 1868 Spooner became a partner with Oliver and John Lonkey, the Elliot brothers, Henry M. Yerington, William Fairburn and Simon Dubois in the Summit Fluming Company and operated a shingle mill and sawmill.  In 1870 Yerington, Bliss & Company took over the summit fluming company.

In 1873 another sawmill was erected at Spooner Meadows.  Later in 1873, all the mills were taken over by the Carson & Tahoe Lumber and Fluming Company. This company, headquartered at Glenbrook, went on to become the largest of the three huge companies supplying wood and lumber to the Comstock.