The Relationship of Rock Writing and Acoustics

This retiree Site Steward loves it when Samantha and Rayette offer up special projects.

In June, I was knee-deep assisting with graffiti remediation in Lincoln County when the BLM contractor, Jannie Loubser – Stratum Unlimited, asked me if I would mind videotaping an archeologist performing an archaeoacoustics study in and around White River Narrows in Lincoln County.

First, what is Archaeoacoustics? Essentially it is the study of the role acoustics played in the lives of past people and how that can be found in the archaeological record. The relationship between rock writing and acoustics, which is what I was asked to help with, has been the focus of Steven J. Waller, Ph.D. research since 1987. To provide a better understanding of the subject, a high-level look at his work is provided below:

Since many ancient cultures have had supernatural explanations for echoes, his theory is that echoing locations such as caves and canyons would have been considered sacred and decorated with the images evoked upon hearing the echoes. For example, he has found that echoes of percussion noises such as clapping can mimic the sound of hoofbeats, and hoofed animals are a frequent rock art theme. Voices appear to emanate from rock surfaces where beings are depicted as if the images are speaking.

Dr. Waller asks, "Were the echoes in the canyon the inspiration for cave paintings?". His website describes his scientifically testable theory about prehistoric art correlating with echoing locations, suggesting sound as a motivation for cave paintings and petroglyphs. The cultural significance of echoes is shown by myths that attribute echoes to spirits. An implication of this research is the previously unrecognized need to conserve the natural acoustical properties of the environment around rock writing sites. Dr. Waller has tested over 300 sites (and has been told about many more) in France, Australia, and the U.S. for sound reflection and found echoes and/or reverberations at almost all of them (the results at some sites were indeterminate because of interference). I encourage all rock writing researchers to clap or call out upon approaching rock writing sites and listen to determine if the echoing is better in that location than in the surrounding terrain.

He recently completed an analysis of acoustic data collected throughout Horseshoe Canyon and found that the five rock writing sites correlate exactly with the five locations within the canyon, possessing the greatest intensity of echoing.

An important implication of these discoveries is that the environment around rock writing sites should be left in a natural condition so that the acoustical properties are not affected. For example, it is impossible to hear the echoes if "protective" walls are constructed around the art, or worse yet, if the area is blocked, for example by flooding from a dam. I spent several highly interesting days schlepping my camera gear around with Dr. Waller, always on the lookout for rattlers. He is very organized, carrying a number of sound-making instruments in his backpack. He was very much the people person. He made me feel valuable and quite often asking for my opinion on sounds and locations. It was a good partnership for the three days we worked together. We would start at specific sites and spread out over the area visually and acoustically documenting results from the various locations. To acquire baseline data, we would set up at non-cultural locations in the area and document these results as well. There were challenges, of course; being in and around White River Narrows, you must deal with the ambient vehicle noise, especially trucks on Nevada 318. Another hefty challenge was the changes in the area because of road construction, hills, berms, and impediments to line-of-site acoustics, which made correlations between today and pre-contact times difficult, if not impossible. 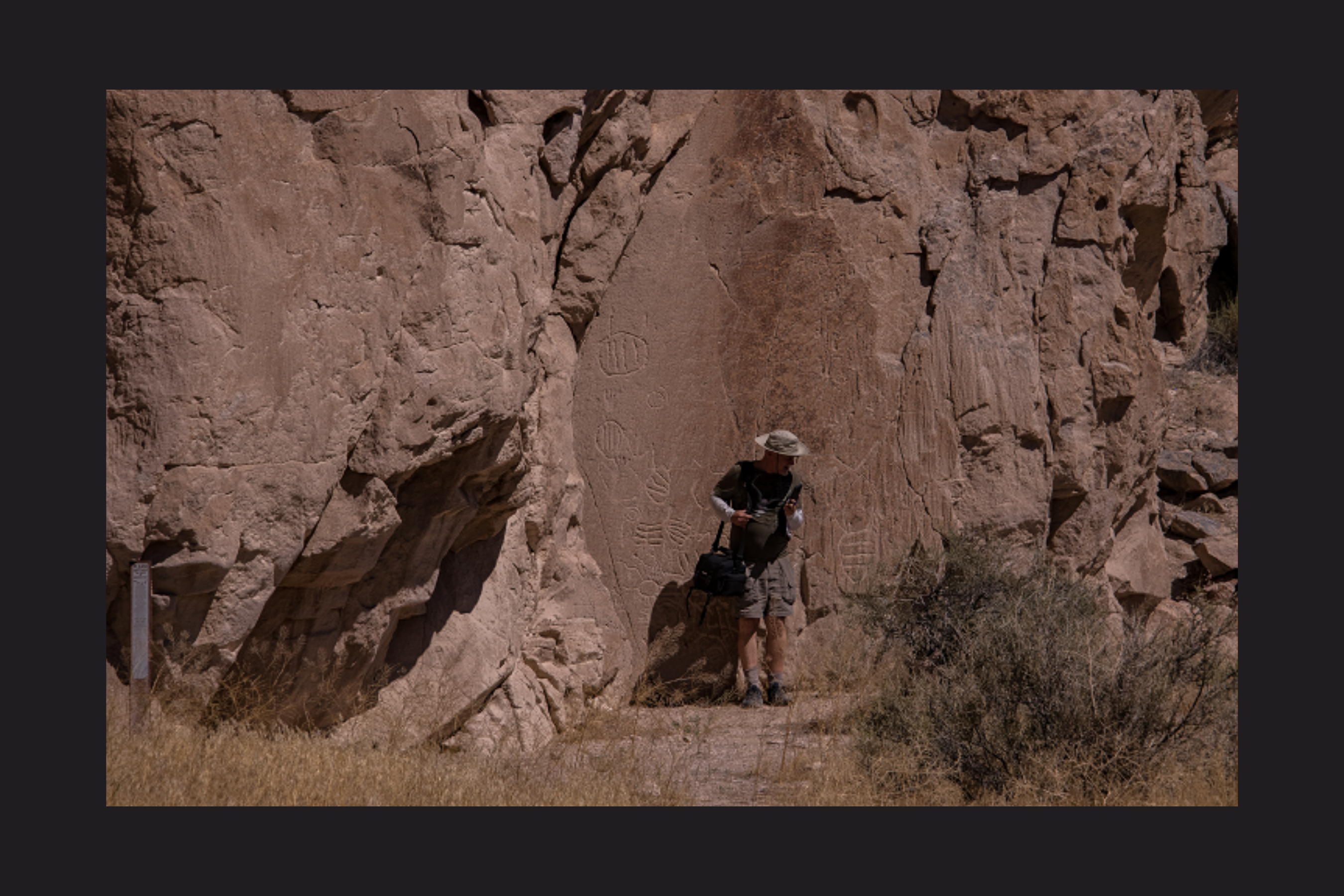 When I got back to Alamo for the evening, the second wave of my work began as I needed to download the videos, edit them, extract the audio segments, and upload results for Dr. Waller. I was living on caffeine, almost like when I worked. But this was much more fun.

When Dr. Waller completes his work on White River Narrows acoustics, Samantha will publish it on the NSSP website. For those of you interested in his work, you can find more information at the following link: https://sites.google.com/site/rockartacoustics/.

To view one of our more challenging recording efforts, watch this video: https://vimeo.com/430615444.

On Being a Site Steward