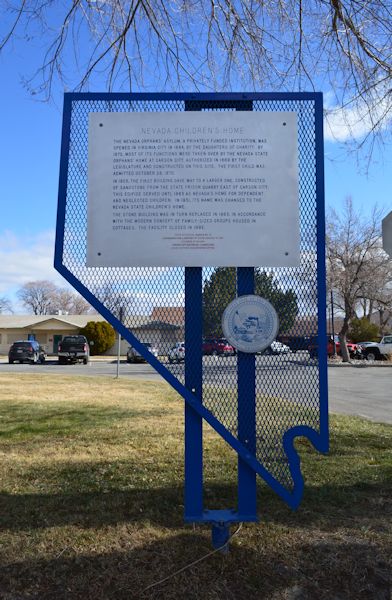 The Nevada Orphans’ Asylum, a privately funded institution, was opened in Virginia City in 1864 by the Daughters of Charity.  By 1870, most of its functions were taken over by the Nevada State Orphans’ Home at Carson City, authorized in 1869 by the legislature and constructed on this site.  The first child was admitted October 28, 1870.

In 1903, the first building gave way to a larger one, constructed of sandstone from the state prison quarry east of Carson City.  This edifice served until 1963 as Nevada’s home for dependent and neglected children.  In 1951, its name was changed to the Nevada State Children’s Home.

The stone building was in turn replaced in 1963, in accordance with the modern concept of family-sized groups housed in cottages.  The facility closed in 1992.

COMMEMORATING A CENTURY OF STATE SERVICE TO THE