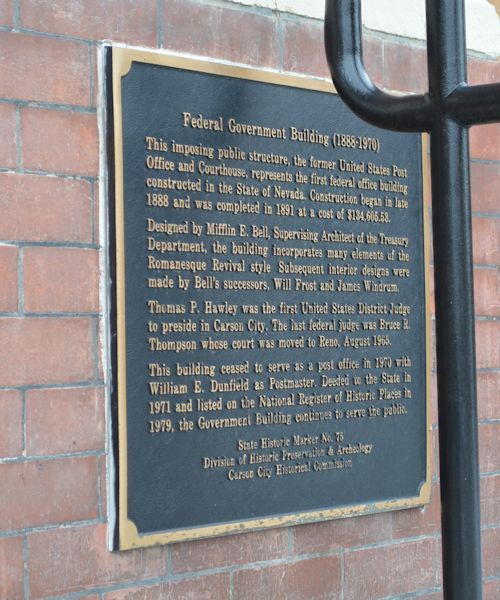 This marker is a bronze plaque on the front of the Paul Laxalt Building.

This imposing public structure, the former United States Post Office and Courthouse, represents the first federal office building constructed in the State of Nevada.  Construction began in late 1888 and was completed in 1891 at a cost of $134,605.53.

Designed by Mifflin E. Bell, Supervising Architect of the Treasury Department, the building incorporates many elements of the Romanesque Revival style.  Subsequent interior designs were made by Bell’s successors, Will Frost and James Windrum.

Thomas P. Hawley was the first United States District Judge to preside in Carson City.  The last federal judge to officiate here was Bruce R. Thompson whose court was moved to Reno, August 1965.

This building ceased to serve as a post office in 1970 with William E. Dunfield as Postmaster.  Deeded to the State in 1971 and listed on the National Register of Historic Places in 1979, the Government Building continues to serve the public.