Empire and the Carson River Mills 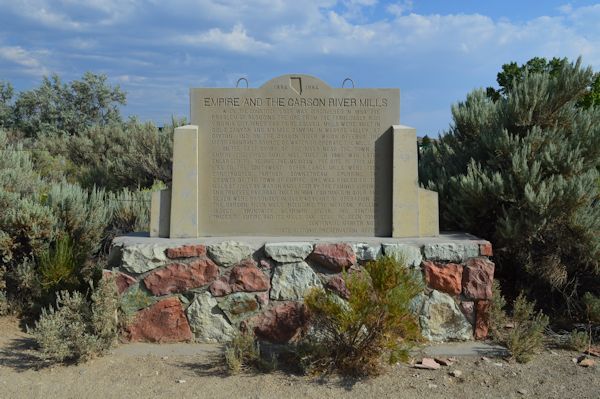 When the Comstock Lode was discovered in 1859, the problem of reducing the ore from the fabulously rich Virginia City mines had to be solved.  Mills were built in Gold Canyon and Six Mile Canyon, in Washoe Valley, at Dayton, and on the Carson River which offered the most abundant source of water to operate the mills.

On the east shore of the river near the town of Empire the first small mill, built in 1860, was later enlarged to become the Mexican.  The site of this mill lies to the southwest.  Other large mills were then constructed farther downstream, spurring the growth of the town of Empire.  Ore was hauled to the mills at first by wagon and later by the famous Virginia and Truckee Railroad built in 1869.  Fortunes in gold and silver were produced in over 40 years of operation by the Carson River mills including the Mexican, Yellow Jacket, Brunswick, Merrimac, Vivian, and Santiago.  Traces of Empire and its mills can still be seen today.